BrianZ Member Posts: 1,135
September 2019 edited November 2019 in Modifications & Upgrades
In my previous discussion about how to rotate the tongue jack for access from the rear, our ultimate goal was to install a hitch-mounted bike rack without interfering with the jack.  I can now share the second part of the story - getting the bike rack mounted.. 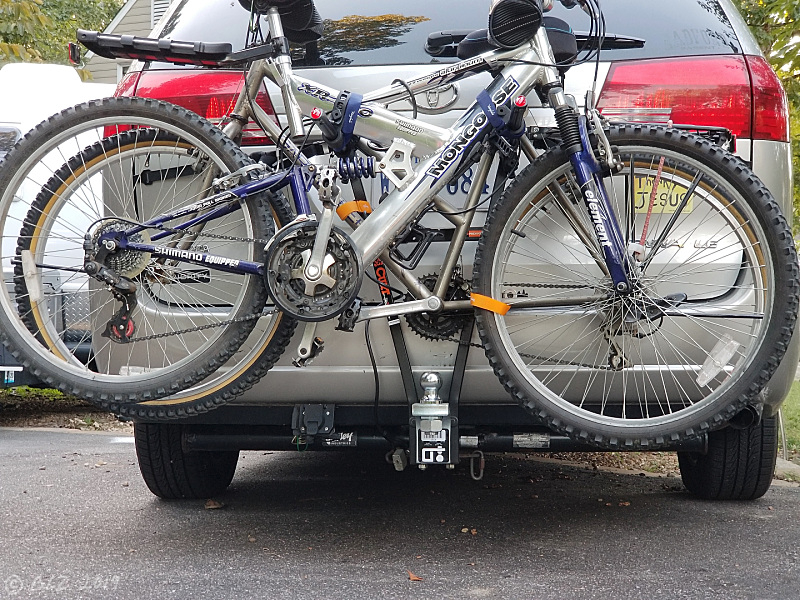 Upon learning of the cleverly designed Curt brand hitch-mounted bike rack, I soon realized that our draw bar (or ball mount if you prefer) did not have enough space on the 2x2" shaft to mount such a clamp-on design.  So, first thing was to choose a bar that offers a couple extra inches to clear the bumper.. 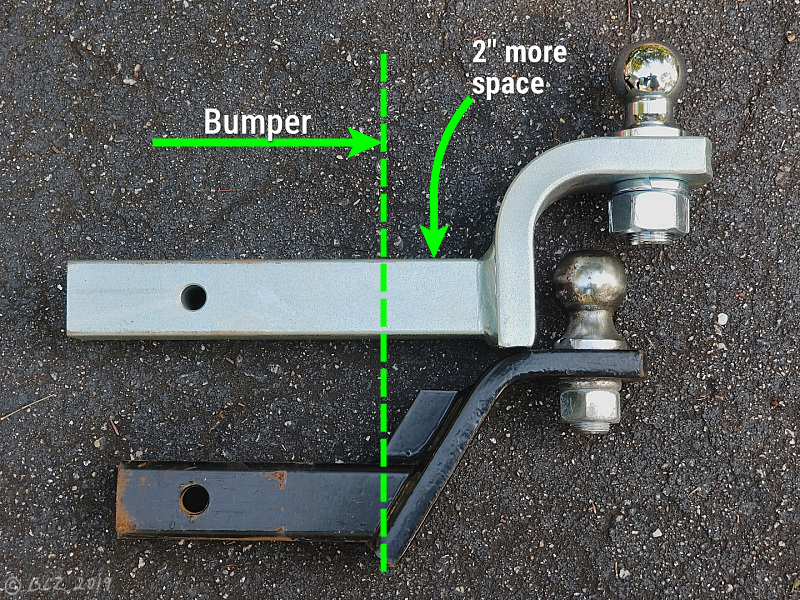 I found this 12" bar at e-trailer which fit the need.
The only "hitch" with this choice was that to get that extra usable space required a much heftier solid steel bar (which is overkill for a modest weight) with a thicker shank on the ball.  That shank has a 1-7/8" nut that requires 450 ft-lbs of torque to tighten!

Well, I do have a torque wrench, but it only has a half-inch drive that goes up 250lbs.  It's instruction sheet did offer this formula for extending capacity by adding an "adapter wrench".. 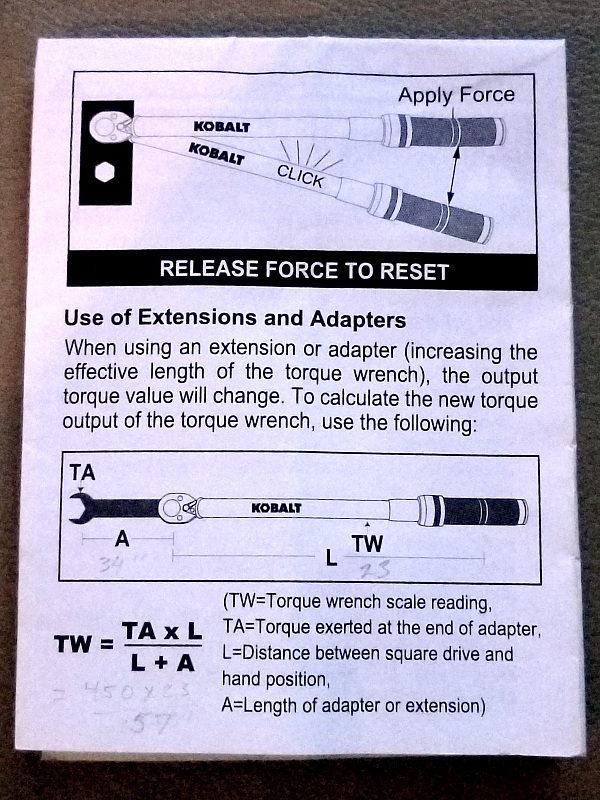 So, I figured I'd give that a shot using this arrangement to connect using a crescent wrench inside a 30" "cheater bar" I had been keeping in the [email protected] for stubborn lug nuts.. 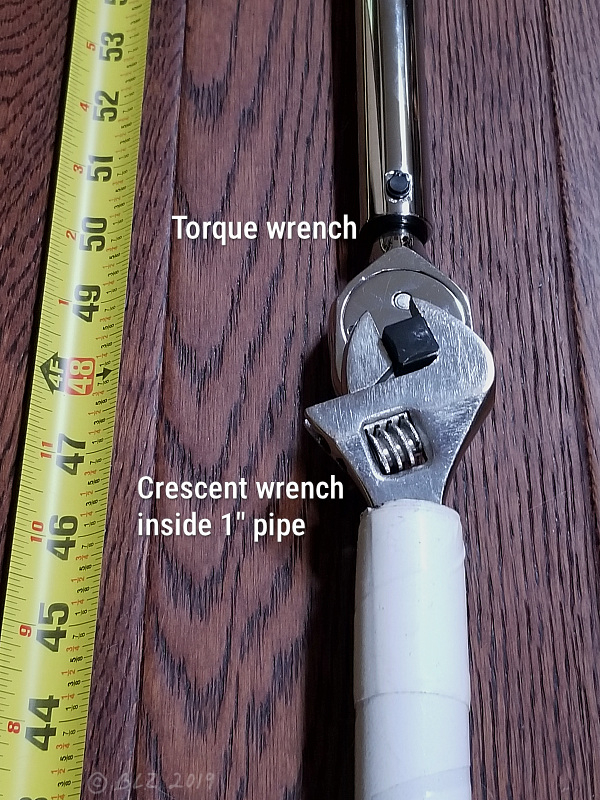 However, the only pipe wrench I had to put on the on the other end that would open to 2" was an antique, and this is how that ended up.. 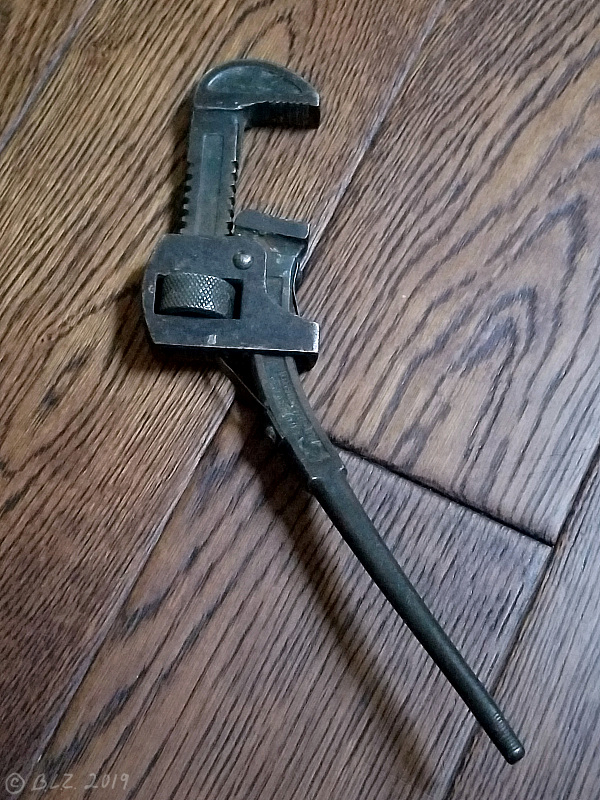 I obviously needed a bigger wrench, but by now I  was up for a challenge, so didn't want to take the easier way out & visit a trailer service place to get it done.  Instead, I got a bigger wrench & added a bigger pipe to fit it, so here's how that all fit together, with the math & measurements applied. 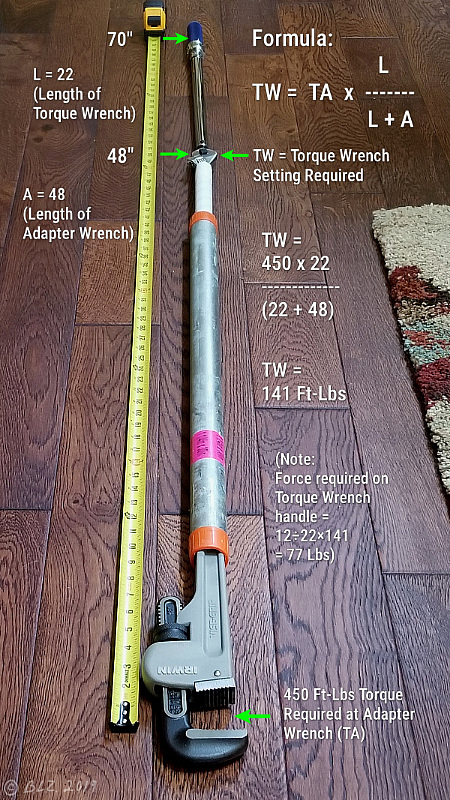 This showed I needed to set my torque wrench to about 140 lbs, well within its limits, which would require me to apply about 75lbs of force to the handle at the end.  All is good in theory at least, but this nearly 6ft long Rube Goldberg looking apparatus looked a little questionable.  I would just have to give it a try.

My only concern was twisting of the crescent wrench.  The other issue I thought of was the fact that 450 lbs exceeds our hitch's 350 lb weight limit.  So, I  first jacked up the car just a half inch, enough to get some blocks of wood underneath.. 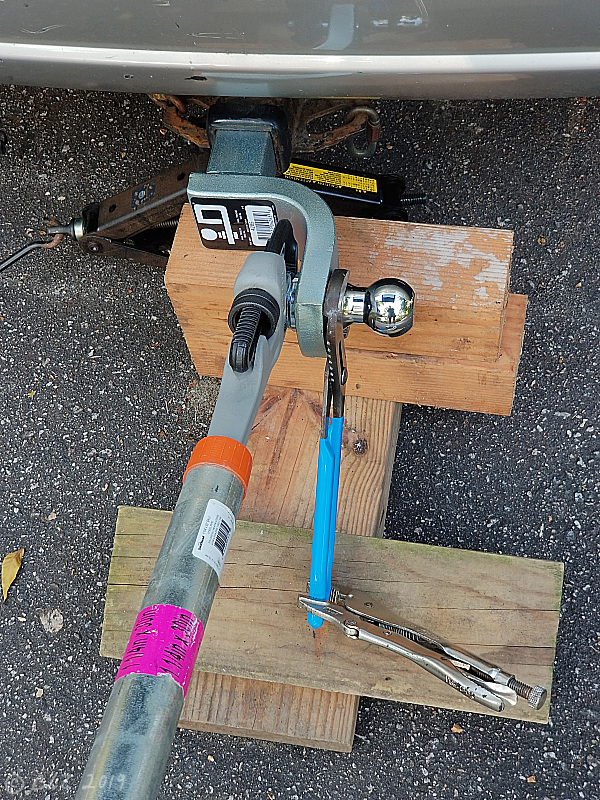 I expected an issue with the ball twisting, so clamped on some pliers with a block of wood underneath to prevent that - its base has two flat sides for that purpose.
So, here's what it looked like from my perspective.. 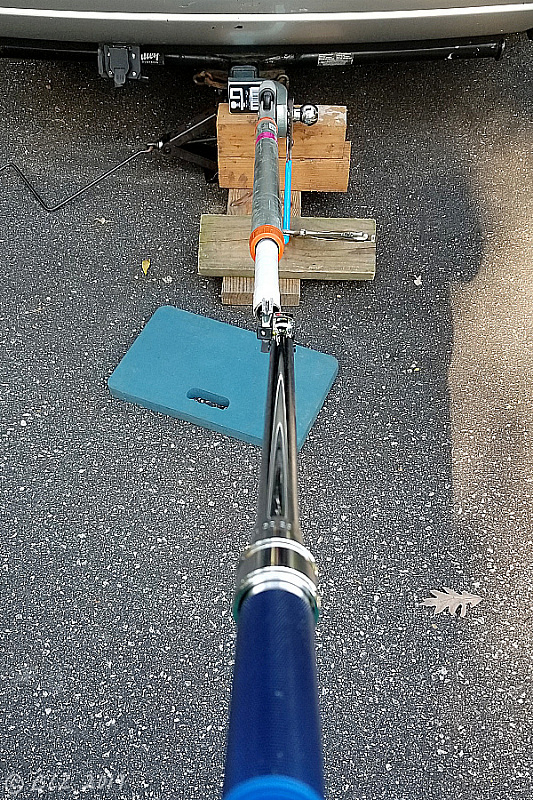 While I  kept the main force on the blue handle, I had to keep a hand on the other end of the torque wrench just to steady the crescent wrench to keep it from twisting.  It was a bit tricky, but I finally managed to get enough pressure on it to hear those welcome clicks of the torque wrench saying "good, you can stop now!".  450 ft-lbs done!  Or in this case 450 lbs that feels like only 77.

So, here's another angle showing a higher perspective where you can get the impression that there is enough room for hitching up the trailer.. 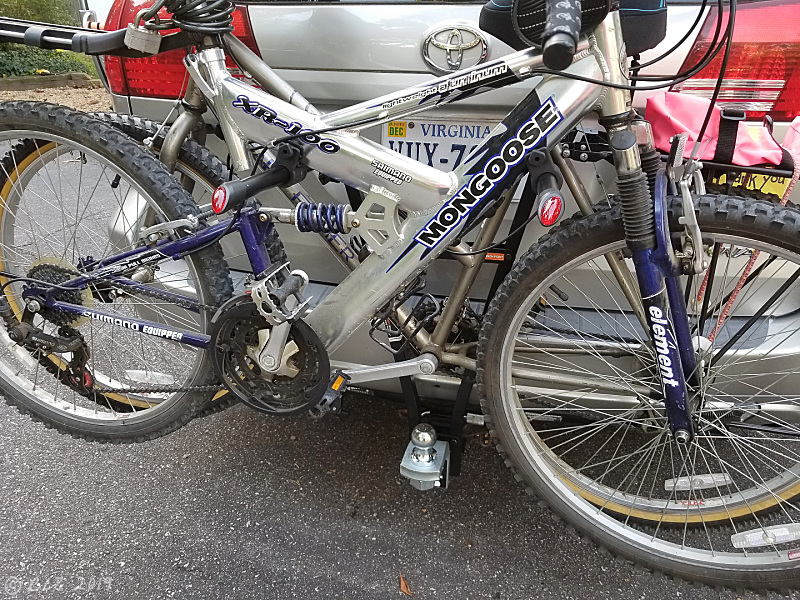 I did, in fact get it hitched up and towed briefly.  I was just beginning to test for range of motion at different turning angles when I noticed a substantial puddle of antifreeze coming from under our Sienna van.  So, unfortunately, I had to put everything on hold, including our next camping trip scheduled for tomorrow, and get the TV in for service.  The leak is likely coming from an aging seal at the water inlet on the engine block, a major repair of about 6 hours and $1500, so it's going to be a few days just to get parts for our 15 y/o van.
At least the bike rack project seems to have worked, and better that this happened when it did rather than in the middle of a camping trip, so considering ourselves lucky & blessed.

PS:  The bike rack itself is very nice and solid, plus it can be quickly installed & removed, and folds into a rather compact form for storage.  It does take some force to lock it into position, which I could only do by putting my foot on top of the crossmember.  The handle is only useful for releasing it (which must be done carefully, since it snaps open with some force).  I think it's safer to release the clamp with straps in place to avoid injury.

The only issue I noticed pertains to the clearance of the 2 bike support bars that project towards the rear.  Since they extend backwards to about the trailer jack post (but don't interfere with it), there would not be enough space to actually slide a bike off the rack & slide it sideways between the rack and jack post to remove it.  I plan to [hopefully] fix that issue by sawing off about 4 or 5 inches from those bars.  We only plan on carrying 2 bikes, so this shouldn't be a problem, as it's designed to carry up to three bikes.  I will have to followup later when we get our TV back from the repair shop.