rh5555 Member Posts: 380
October 2019 in Battery/Electrical & Solar
I have been wondering for some time if the "don't discharge your batteries beyond 50%" rule really applies to AGM batteries.  AGM batteries claim to be deep discharge, and 50% discharge doesn't seem very deep to me!  So I did a little research...
If you look at the data for Odyssey AGM batteries, you find that they are good for 630 discharges to 50% but only 400 discharges to 80%.  Seems obvious that the 50% depth of discharge (DoD) is better.  But hang on, if you flatten your batteries to 80% DoD, you won't have to do the recharging as often, so fewer cycles.  The important parameter is your lifetime capacity in Amp-hours, which you get by multiplying the battery capacity * DoD * number of discharges.  For a 225 Ah battery, your lifetime capacity is 71,000 Ah if discharged to 50%, but is 72,000 Ah if discharged to 80%.  Indeed, If you look at Odyssey's data for 100% DoD, you still get 72,000Ah of lifetime capacity!  For Odyssey batteries, there is absolutely no reason to worry about your DoD, you're not gaining anything by starting up that generator when your battery gets to 50%.
But we don't have Odyssey batteries, we have Harris batteries for which there is a dearth of information about its discharge cycles vs. DoD.   So instead I created an "Average" battery from Trojan, Concorde, Odyssey and Rolls AGM products (these were the only ones I could find with detailed DoD data). 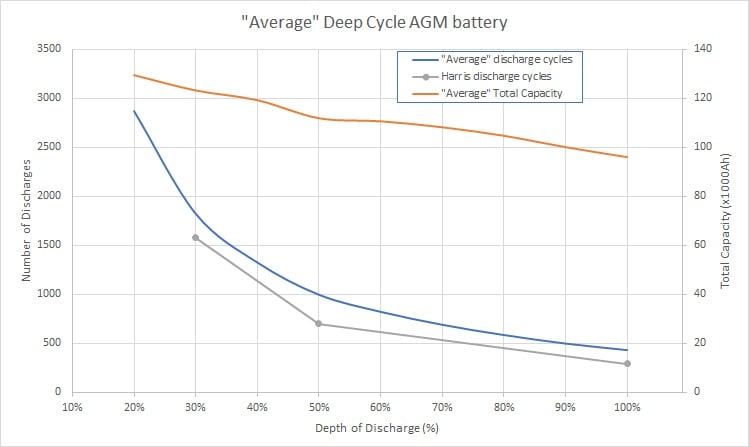 I've included the 3 data points for the Harris battery, and you can see that its number of discharges under-performs the average, but has much the same overall shape.  So now you can see how DoD relates to total capacity for our average AGM battery: 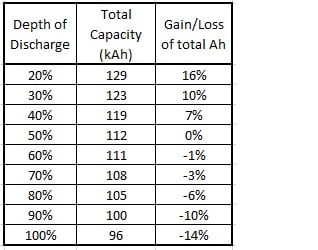 So going from 50% DoD to 80% DoD will just lose you 6% of your lifetime output from your battery.  Not really worth worrying about.
Take home message:  If you're using AGM batteries, don't get too fixated upon getting them recharged once you get to 50% depth of discharge.  Any time up to 80% is good.  More important is not to leave them discharged any longer than you have to.