BrianZ Member Posts: 1,611
September 2021 edited September 2021 in Modifications & Upgrades
Well, I have wanted to do this for a long time, but the examples I had seen were either for a different seat hinge, or the method looked questionable to me or short on details.  There have been at least a couple of discussions here..
2015: https://tab-rv.vanillacommunity.com/discussion/comment/149676#Comment_149676
2018: https://tab-rv.vanillacommunity.com/discussion/8148/top-hinged-couch-back-for-2018-t-b-320s
Then I saw this video by an engineer, Mark, whose design looked pretty solid to me.  It required welding, but I was willing to pay a shop to do that.. 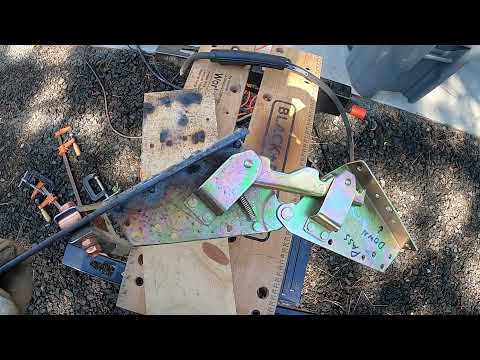 So, I just finished, and here is my result - easy access to that rear storage area - just grab under the middle of the seat back & pull up!.. 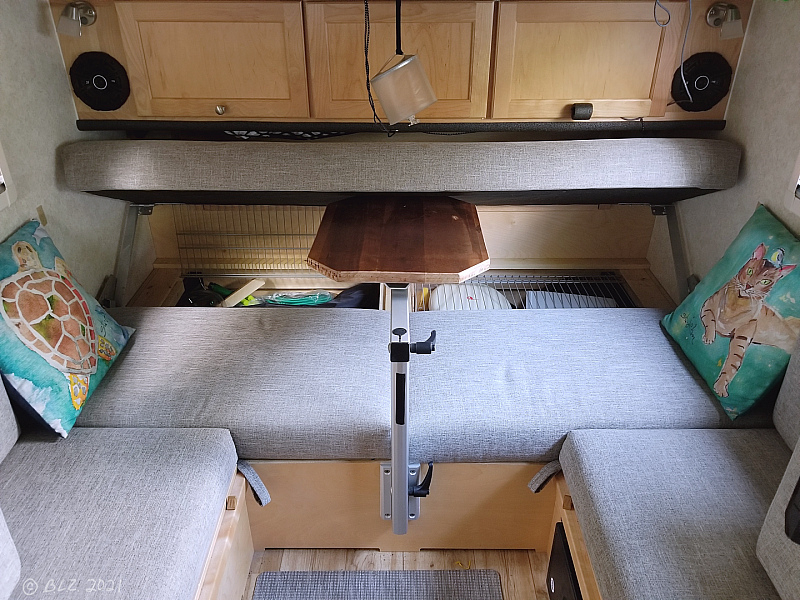 The seat back raises up from the 40° position to as far as the cabinets above permit, which is enough to rotate our table underneath to hold it up.  Our hinged wire shelves over the floor storage bins can still be raised, either before or after lifting the seat back.
Below is the sheet I printed & gave to a local welding shop showing the parts & how they were to be assembled. 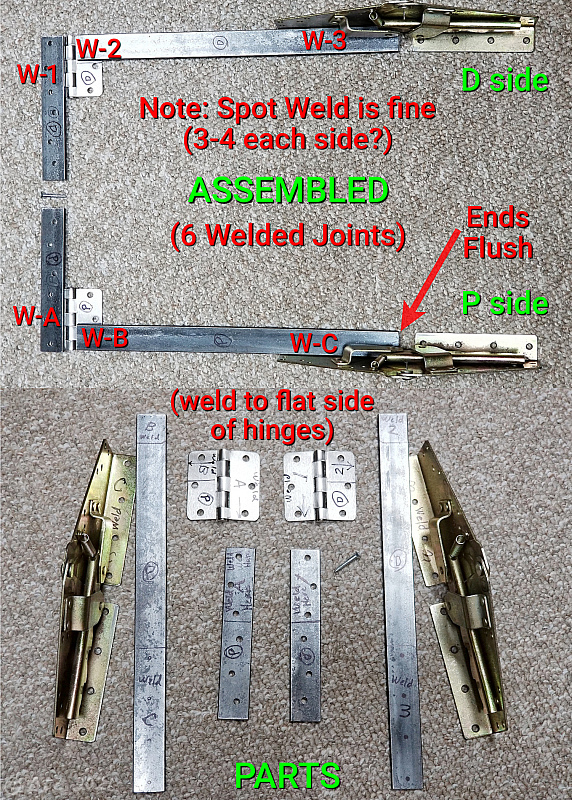 I bought two 3-ft flat 3/16 x 1-1/4" steel bars at Lowes, plus two 3" hinges (~$25); and cut them with a hack saw to make two 15-1/2" plus two 7" long pieces, as specified in the video.  I used a 1/4" drill bit for steel to make the 6 screw holes in the short pieces, lining up 3 of them with those in the hinges.
Here is the completed welding job with right & left hinge assemblies, which I spray-painted with a metallic silver rustoleum.. 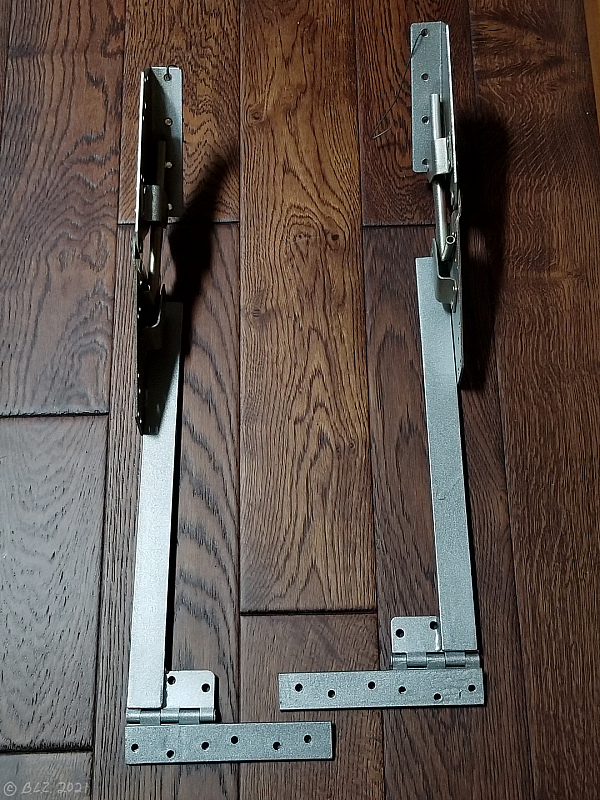 I think they did a great job - ready the same day and took 1-1/2 hrs, for which I paid $80 (more than I expected, but worth the cost IMO).
Here's a closer view of the nice welding job they did.. 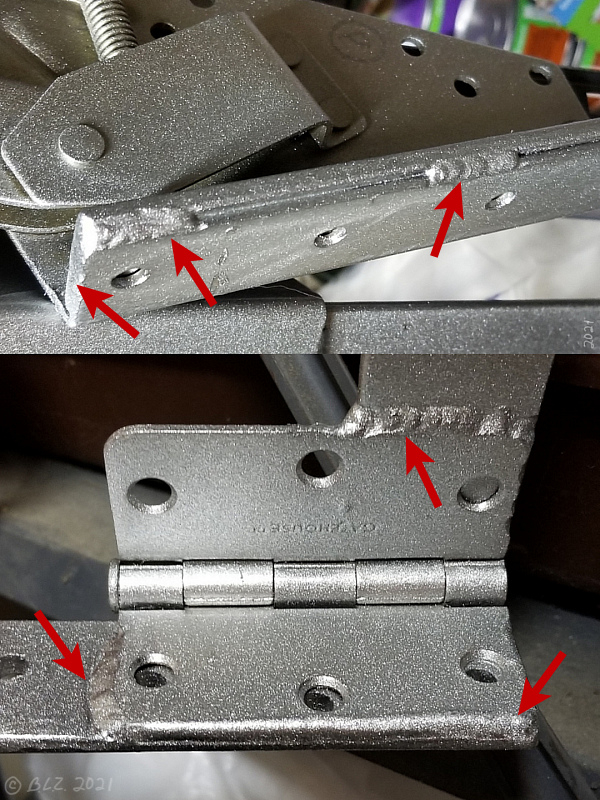 The only thing they could have done better was lining up the holes with those in the hinges, but close enough - only had to redrill a couple of them just to enlarge a bit.
I was all set to install them, but next was the only "gotcha" that I hadn't expected - the same hinges wouldn't fit back into the same space where they were previously mounted, because the new angle of approach was going to be 90 degrees to the old mounting and there was a wood ledge on the frame in the way, which needed to be removed.  See the before & after below.. 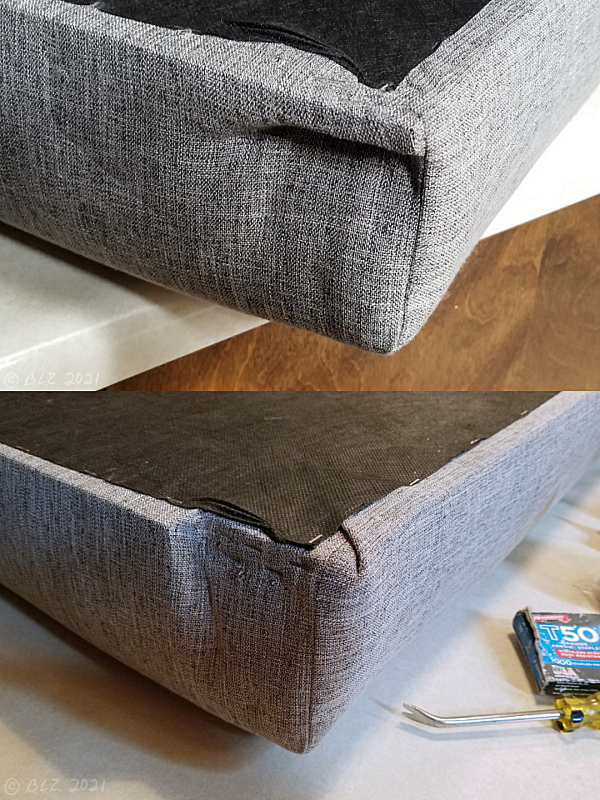 This became the most time consuming part, because I had to remove many staples from the entire side of the frame in order to retract the  upholstery enough to cut the wood.  See below.. 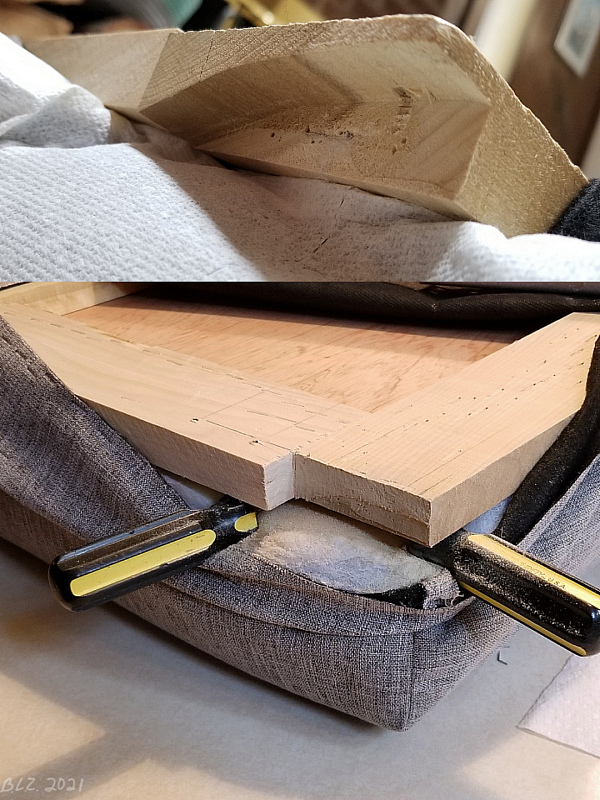 Before & after trimming wood to leave a notch at the corner of the frame.  I used a plunge-cut oscillating multitool to make cuts without damaging upholstery, but one could use a small hand saw, dremel tool, or chisel, and drill out the corner first.
Below shows how the fastened new hinge assembly fits into the newly notched corner of the passenger side seat back after the upholstery had been replaced.. 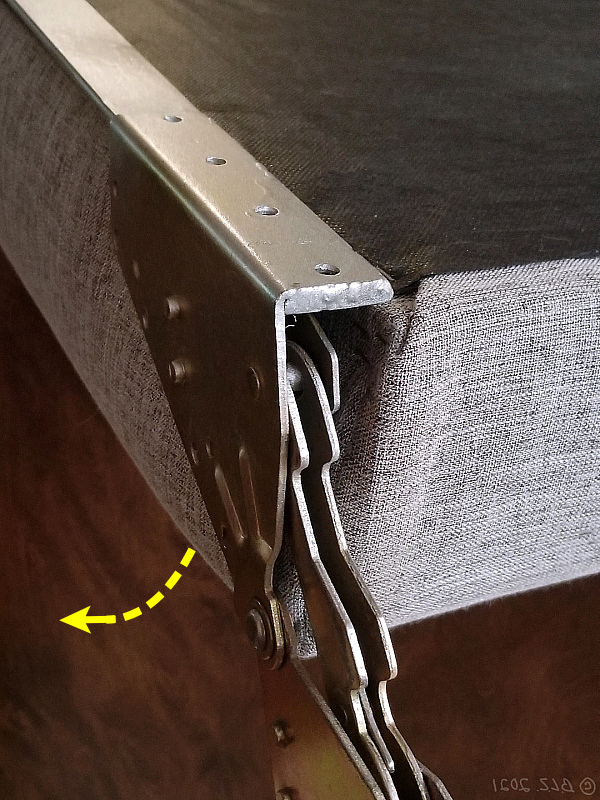 I was also able to use the original screw holes to remount the hinges into the [email protected]
Below is the remounted new double hinge in action.. 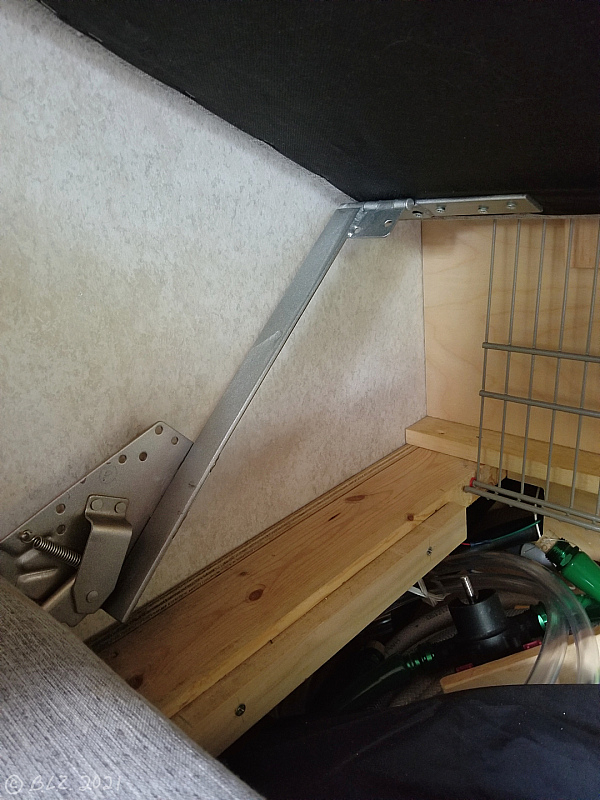 The seat back is only attached at the top.  It works great, and is quite solid.
This view shows more what the view is like while actually using it.  Easy access now - Hallelujah! 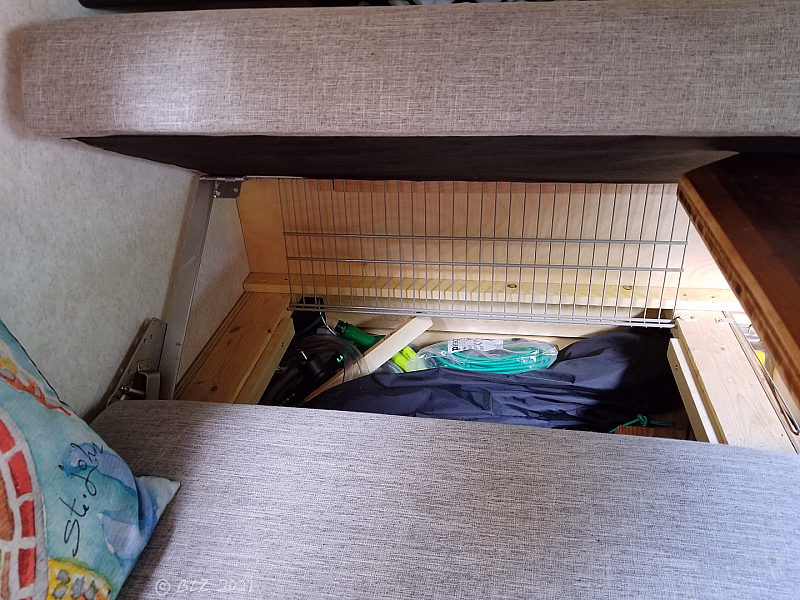 The last time that I looked everywhere else for something that I eventually found in here, it was because this was the last place that I wanted to even try to look.  Now, there's nothing stopping me.

Below are some of the special tools that were either necessary or handy to make the job easier.. 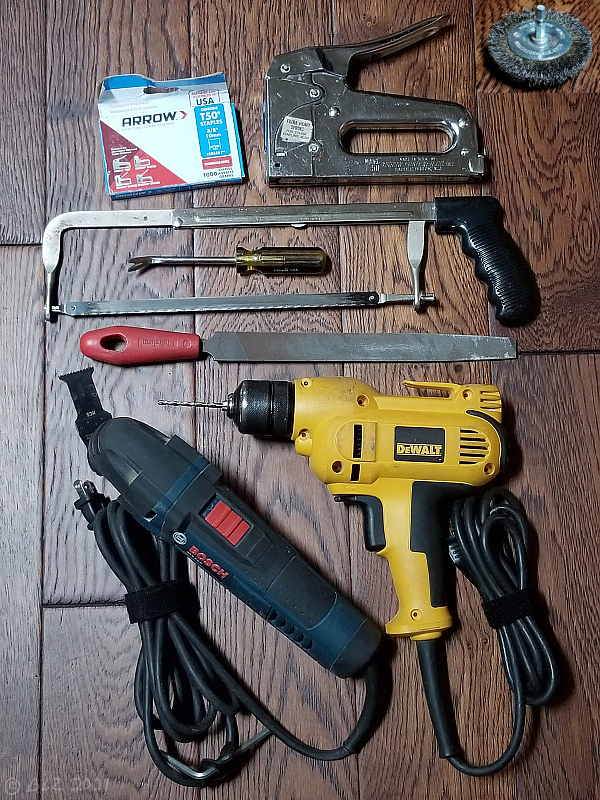 The 3" wire wheel brush used on the electric drill was handy for cleaning up the steel bars prior to welding & painting.  I forget if that screw-driver looking tool with a claw at the end has a name, but it's very handy for pulling up staples. (staple remover thingy?)
[Edit:  Home depot calls it a "Tack Puller".]
I also gave a couple of taps with a hammer to each of the new 3/8" stainless staples after shooting them in.  You may also need to have either a vice or pair of screw clamps & work bench to hold the steel bars while cutting, filing, & drilling.  Cutting & drilling was easier than I expected, but you need a drill bit made for steel.
I recall reading Dale Helman's ratings of this project's difficulty three different times as either 3, 4, or 5 out of 5.  If you're handy with tools, have the patience, and don't mind the cost or can weld it yourself, then I expect this mod will be well worth the effort.  I just wish I could have done it sooner.
-Brian in Chester, Virginia
TV: 2005 Toyota Sienna LE (3.3L V6)
RV: 2018 [email protected] 320S, >90 mods
7 · Share on Google+ Share on FacebookShare on Twitter